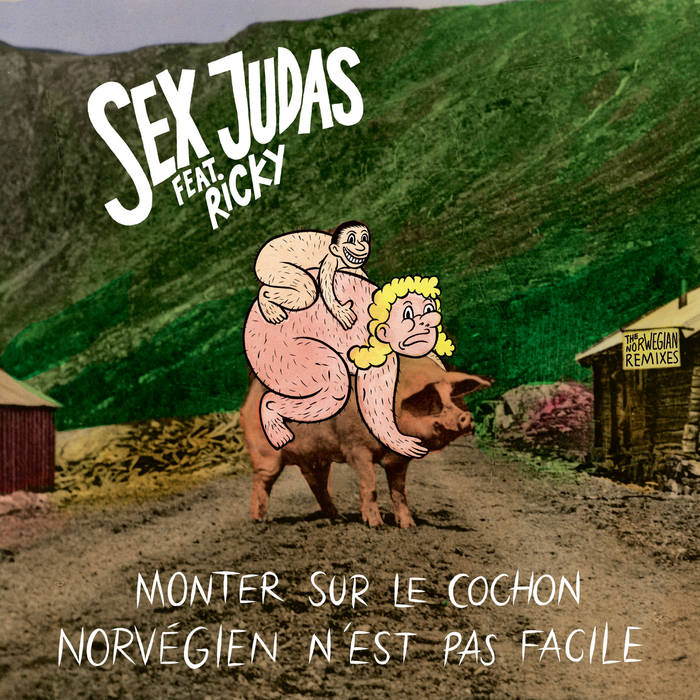 In his restless quest for the funk, Sex Judas invites label-mates as well as players from the Norwegian
underground scene—Blackbelt Andersen, Human Inferno, Charlotte Bendiks, Magnus international, Melkeveien, Arildo, Trulz & Robin and Ricky—to re-imagine originals culled from 2011-2015 releases on Tim Paris’ Marketing label. The mixes are infused with the vigilante attitude, grit, and funk of the current northern scene, as well as analog, slinky, and abstract house. After this scintillating tease, stay tuned for Sex Judas’ full album drop later this winter on another undisclosed label....

01 Salvador - Blackbelt Andersen RMX
A friend from the Oslo squat party scene at the turn of the century, lover of everything Detroit, nerd of the dance. Delivers what might be the strongest mix of them all. Slinky, analogue, dirty house music topped with that haunting Salvadorian flute. You may also know him from a series of releases on Full Pupp.

02 Salvador - Charlotte Bendiks RMX
Hats of to Charlie from the top north. Makes wonderful abstract dance music and plays regularly at Salon des Amateurs, Cologne -and has already relased stuff on Love OD and Comeme. She stretches Salvador into a 6 min exercise in minimal machine funk.

04 Big Sex Thing – Ricky’s Rerub
When Ricky’s barking in the studio you know it’s happening! Sex Judas’ trusted sidekick know his way around the house and turns “Big Sex Thing” into a floor monster, with timpani’s, Latino percussion and a killer acidline.

06 My Girls – Melkeveien RMX
Beloved Uncle Melker is a wonderful piece of work. Residing in the farmer capital of Hamar, drenched in childhood nostalgia, local hot dogs, hip hop and freak music. His music’s so rural, it’s the most urban thing you ever heard.

07 Everything Changes - Trulz & Robin RMX
Spreading deep techno love over the Oslo scene for over 20 years. Trulz & Robin are responsible for countless underground parties and with keeping techno alive in the disco capital. They always favoured a deep, analogue, midi-synch sex groove, known for their long, slinky and timeless dj-sets. They blow the house up with this bomb of a remix!

Cymasonic Recordings is a musical imprint and collaboration between long time friends Trulz & Robin (Trulz Kvam, Robin Crafoord) and Arildo (Arild Lopez). The 3 connected through music in the underground techno scene in Oslo the mid 90’s and have been collaborating on hundreds of parties and a handful of records before finally deciding to do a label together 15 years later. ... more

If you like Monter Sur Le Cochon Norvégien N'est Pas Facile - The Norwegian Remixes, you may also like:

Bandcamp Daily  your guide to the world of Bandcamp